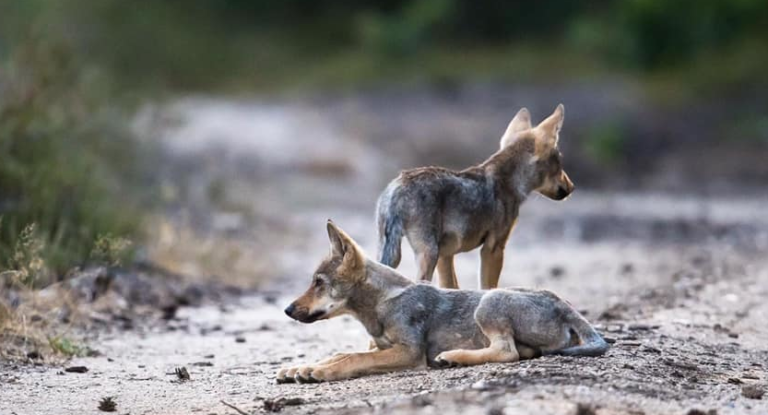 Mainly the opponents of wolves claim, that the wolf population should be reduced because wolves have no natural enemies and they reproduce …. like proverbial rabbits. If this were true, there would be many more wolves in Poland than 2 thousand. Today a few words about the mortality of wolf pups which are being born right now or are about to be born.

Wolves come into heat in February-March and puppies are usually born in May (until early June). Females usually pup in burrows (often old badger or fox burrows, widened by wolves), but also in tree trunks or even in well-sheltered beds on the ground. Wolves may use one to several burrows during the pup rearing period, moving or relocating pups from time to time. Usually the pups stop using the burrows in July, spending most of their time in lairs near them. Most often 5-6 pups are born, but on average 1-3 survive till winter.

The authors of the publication ,, Ecology of the wolf (Canis lupus) in recolonized areas in western Poland in the 21st century” ( Nowak, Mysłajek 2019) report that the average litter size at birth was 5.1 and decreased to 4 pups by the end of August (mortality averaged 7% per month). In the second period, cub mortality increased to 14% per month, and by the end of November the average number of cubs per group was 2.5. Thus, about 50% of pups survived from birth to 7 months of age. Other studies also confirm such high mortality of wolf pups , resulting from both natural and anthropogenic factors, both in lowland (Jędrzejewska et al. 1996) and mountain (Nowak et al. 2008) populations living in Poland. Basing on the results of that study, it can be assumed that in the studied group of wolves only 2 pups on average survive to winter and 1.8 pups per family (Bialowieza Forest) and 1.3 pups per family (Beskid Slaski and Zywiecki ) on average survive to the following spring. Among the natural factors we have to mention scabies, which unfortunately also affects wolf puppies. Alot of interesting information on these issues may be found on the blog of Prof. Vadim Sidorovich, a zoologist from Belarus, it should be mentioned here that his observations concern one forest set and have not been scientifically measured.

According to Sidorowicz, factors that increase the mortality of puppies are:

– moving them between burrows, especially over long distances; it happens, for example (especially in the case of numerous litters, over 7 cubs), that the cubs are abandoned

– the presence of people near breeding sites

According to the author, a serious factor affecting the survival of pups in Belarus is the predation of European lynxes; it is estimated that up to 50% of wolf cubs die this way. The scale of this phenomenon in relation to Polish conditions is unknown. Puppies can also be killed by foxes, badgers, raccoons, golden eagles, white-tailed eagles and even ungulates.

Wolf pups are also killed by people, picking and killing them is one of the ways of controlling the wolf population in Belarus. Some cubs are also killed on roads. In conclusion, observing 33 litters, the zoologist estimated that 52% of pups die within the first 6-7 months, thus putting the mortality rate of young wolves at the same level as the Polish researchers.

This website uses cookies to improve your experience while you navigate through the website. Out of these, the cookies that are categorized as necessary are stored on your browser as they are essential for the working of basic functionalities of the website. We also use third-party cookies that help us analyze and understand how you use this website. These cookies will be stored in your browser only with your consent. You also have the option to opt-out of these cookies. But opting out of some of these cookies may affect your browsing experience.
Necessary Always Enabled
Necessary cookies are absolutely essential for the website to function properly. These cookies ensure basic functionalities and security features of the website, anonymously.
Functional
Functional cookies help to perform certain functionalities like sharing the content of the website on social media platforms, collect feedbacks, and other third-party features.
Performance
Performance cookies are used to understand and analyze the key performance indexes of the website which helps in delivering a better user experience for the visitors.
Analytics
Analytical cookies are used to understand how visitors interact with the website. These cookies help provide information on metrics the number of visitors, bounce rate, traffic source, etc.
Advertisement
Advertisement cookies are used to provide visitors with relevant ads and marketing campaigns. These cookies track visitors across websites and collect information to provide customized ads.
Others
Other uncategorized cookies are those that are being analyzed and have not been classified into a category as yet.
SAVE & ACCEPT